The saintly bishop was succeeded by Archimandrite Aftimios Ofiesh, a priest from Montreal, Quebec. It was during his episcopacy that the present building at 355 State Street in Brooklyn was purchased from the Episcopalians in 1920. Prior to the acquisition, it was called St. Peter's Episcopal Church. The parishioners were successful in converting it into an Orthodox House of worship with the proper iconostasis, icons, chandeliers, etc. Unfortunately during the Great Depression, the church and the adjacent property were lost because the mortgage could not be paid, but the parishioners managed to rent it on a monthly basis. A new vision to form an "American Orthodox Church" emerged with Archbishop AFTIMIOS as its administrator. With the blessing of the Russian Archdiocese, the Priest Emmanuel Abohatab was consecrated in 1928 as the Bishop of Montreal, and the Priest Sophronios Bishara was consecrated as the Bishop of the West Coast. The vision of the American Church was short-lived however. Archbishop AFTIMIOS was forced to leave the episcopacy in 1933 because he chose to marry. He lived to a ripe-old age and died in 1966. Bishop EMMANUEL, who continued to edit "Al Kalimat" as often as he could, served admirably until his death in 1933. The Bishop SOPHRONIOS also died in the middle of his career. In the meantime, a bishop from the Synod of Antioch had been ministering to some churches in America. His Eminence, the Metropolitan GERMANOS (Shahadi) had managed to bring several churches into his "jurisdiction" and the Syrian Church in North America found itself greatly divided into the "Russy-Antaki" factions.

Then in the early 1930s, all the Arabic-speaking bishops died, and the Russian Church found itself in the chaotic state due to the Revolution in Russia. The Church in Antioch sent Archbishop VICTOR (Abouassaly) to unite the Arabic-speaking people in North America under Antiochian care. Shortly before his untimely death, Bishop EMMANUEL learned that his efforts to place the churches of the Syrian Mission under the care of the Church of Antioch were successful. Archbishop VICTOR spent his short-lived episcopacy trying to in fact unite all his people. He too died at a young age in 1934.

As the Patriarchal Vicar in North America, Archmandrite Antony Bashir was successful in getting St. Nicholas Cathedral of Brooklyn back into the hands of its rightful owners. The mortgage was paid because of the generosity of certain parishioners and the church building was saved, however, the adjacent property was never recovered.. After the death of Archbishop VICTOR, Archmandrite Antony Bashir was elevated by the Holy Synod of Antioch to be the Bishop of New York and All North America. He was consecrated on April 19, 1936, in St. Nicholas Cathedral of Brooklyn, and served with distinction and honor, greatly loved by his flock throughout the United States and Canada. It was to his credit that the Church in North America was "Americanized", that is, brought into the 20th Century. However one event "plagued" his episcopacy of thirty years. A group of Arabic-speaking people, also within the Church of Antioch, followed the Archmandrite Samuel David into division. Consecrated by the Russian bishops, he formed the Archdiocese of Toledo, Ohio and Dependencies. This painful division would continue until 1975, when the two groups, led by Metropolitans PHILIP and MICHAEL, agreed to united under the leadership of Metropolitan PHILIP.

Upon the death of Metropolitan ANTONY in 1966 (Archbishop SAMUEL had died in 1958), the leadership of the Antiochian Archdiocese passed on to Archimandrite Philip Saliba who was consecrated in Lebanon on August 14, 1966. The Archdiocese, under Metropolitan PHILIP's magnificent leadership, has been united for the first time since it was formed as "The Syrian Mission" in 1904. Metropolitan PHILIP reposed on March 19, 2014 after almost 48 years. The mark he left on our archdiocese has been unprecedented. From 66 parishes when he was elected in 1996, the archdiocese grew to 265 parishes and missions at the time of his passing. He established the Antiochian Women, Teen SOYO, The Order of  St. Ignatius of Antioch and he purchased the Antiochian Village. He also opened the doors to scores of converts who embraced the Orthodox faith while, at the same time, maintained his fatherly care to his flock of immigrants from the Middle East and their offspring.  Through his dymanic and visionary leadership, he inspired countless faithful and his impacte will be felt for generations to come. Archbishop MICHAEL (Shaheen), who resided in Toledo, Ohio, served as the Auxiliary until his death in 1992. Bishop DEMETRI served the Archdiocese from the Toledo chancery from 1995 until his retirement in 2003.

In 2002, our Archdiocese petitioned the Patriarchate of Antioch and all the East for autonomy or self-rule during the June meeting of the Holy Synod of the Patriarchate. The request was blessed and, at the October 2003 meeting of the Holy Synod of Antioch, the tomos was signed and self-rule was finalized. As a result of the new self-rule, dioceses were established. The bishops of the new dioceses were Their Graces, ANTOUN of Miami and the Southeast, JOSEPH of Los Angeles and the West, BASIL of Wichita and Mid-America, THOMAS of Charleston, Oakland, PA and the Mid-Atlantic, MARK of Toledo and the Midwest and ALEXANDER of Ottawa, Eastern Canada and Upstate New York. In August of 2010, after a new resolution of the Holy Synod of Antioch, the former diocesan bishops became auxiliaries who assist the Metropolitan in our one, undivided archdiocese. In December of 2011, three new bishops were consecrated to further assist the Metropolitan in the administration of the archdiocese. His Grace, Bishop JOHN is responsible for overseeing the Diocese of Worcester and New England, His Grace, Bishop ANTHONY is responsible for the Diocese of Toledo and the Midwest and HIs Grace, Bishop NICHOLAS is the Auxiliary Bishop of Brooklyn and assists the Metropolitan at the archdiocese headquarters and helps to administer the Diocese of New York and Washington, D.C. on behalf of the Metropolitan.

On July 3, 2014, the Holy Synod of Antioch elected His Eminence, Archbishop JOSEPH as the new Metropolitan of New York and all North America at their extraordinary meeting. Metropolitan JOSEPH's great experience as a pastor and bishop will undoubtedly aid him to continue the legacy of his predecessors from St. Raphael to Metropolitan PHILIP. We look forward to working with him as his servants in the Lord's vineyard to continue building and strengthening the archdiocese.

The present Dean of the Cathedral is the Very Rev. Fr. Thomas P. Zain who also serves as Vicar-General of the archdiocese. Fr. Thomas will be responsible for moving the Cathedral into the 21st Century with God's help and the intercessions of our Patron, St. Nicholas the Wonder-Worker and Bishop of Myra in Lycia and St. Raphael of Brooklyn, the saintly bishop who established our Cathedral.

Thus, the history of the Archdiocese and of St. Nicholas Cathedral of Brooklyn are one and the same. St. Nicholas Cathedral is the oldest continuous church in the Archdiocese and its only Mother Cathedral. Here we see a long and illustrious history because of the love, devotion and sacrifices of the venerable hierarchy, the greatly respected priests and deacons and the holy people of God who have served and continue to serve. Acts of the Apostles 23:1-11
John 16:15-23
Tychon the Wonderworker; 40 Martyrs of Rome; Mark the Just of Apollonia
Location
Parish News
Photos 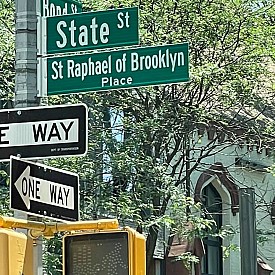 If you would like to join our mailing list to be notified of upcoming events, schedule changes or cancellations, deaths in the parish, etc. please fill out the following form.